I’m going to tell you a story. Are you sitting comfortably? Right, then I’ll begin.

Once upon a time (75 million years ago to be more precise) there was an alien galactic ruler named Xenu. Xenu was in charge of all the planets in this part of the galaxy including our own planet Earth, except in those days it was called Teegeeack.

Now Xenu had a problem. All of the 76 planets he controlled were overpopulated. Each planet had on average 178 billion people. He wanted to get rid of all the overpopulation so he had a plan.

Xenu took over complete control with the help of renegades to defeat the good people and the Loyal Officers. Then with the help of psychiatrists he called in billions of people for income tax inspections where they were instead given injections of alcohol and glycol mixed to paralyse them. Then they were put into space planes that looked exactly like DC8s (except they had rocket motors instead of propellers).

These DC8 space planes then flew to planet Earth where the paralysed people were stacked around the bases of volcanoes in their hundreds of billions. When they had finished stacking them around then H-bombs were lowered into the volcanoes. Xenu then detonated all the H-bombs at the same time and everyone was killed.

The story doesn’t end there though. Since everyone has a soul (called a “thetan” in this story) then you have to trick souls into not coming back again. So while the hundreds of billions of souls were being blown around by the nuclear winds he had special electronic traps that caught all the souls in electronic beams (the electronic beams were sticky like fly-paper).

After he had captured all these souls he had them packed into boxes and taken to a few huge cinemas. There all the souls had to spend days watching special 3D motion pictures that told them what life should be like and many confusing things. In this film they were shown false pictures and told they were God, The Devil and Christ. In the story this process is called “implanting”.

When the films ended and the souls left the cinema these souls started to stick together because since they had all seen the same film they thought they were the same people. They clustered in groups of a few thousand. Now because there were only a few living bodies left they stayed as clusters and inhabited these bodies.

As for Xenu, the Loyal Officers finally overthrew him and they locked him away in a mountain on one of the planets. He is kept in by a force-field powered by an eternal battery and Xenu is still alive today.

That is the end of the story. And so today everyone is full of these clusters of souls called “body thetans”. And if we are to be a free soul then we have to remove all these “body thetans” and pay lots of money to do so. And the only reason people believe in God and Christ was because it was in the film their body thetans saw 75 million years ago.

Well what did you think of that story?

What? You thought it was a stupid story?

Well so do we. However, this story is the core belief in the religion known as Scientology.* If people knew about this story then most people would never get involved in it. This story is told to you when you reach one of their secret levels called OT III. After that you are supposed to telepathically communicate with these body thetans to make them go away. You have to pay a lot of money to get to this level and do this (or you have to work very hard for the organisation on extremely low pay for many years).

Part of the first page of the secret OT III document in L. Ron Hubbard’s own handwriting.

We are telling you this story as a warning. If you become involved with Scientology then we would like you to do so with your eyes open and fully aware of the sort of material it contains.

Most of the Scientologists who work in their Dianetics* centres and so called “Churches” of Scientology do not know this story since they are not allowed to hear it until they reach the secret “upper” levels of Scientology. It may take them many years before they reach this level if they ever do. The ones who do know it are forced to keep it a secret and not tell it to those people who are joining Scientology.

Part of the first page of the secret OT III document in L. Ron Hubbard’s own handwriting

Now you have read this you know their big secret. Don’t let us put you off joining though.

* Dianetics and Scientology are trademarks of the Religious Technology Centre. This document is not connected with that organisation in any way.

Michael Shermer says the human tendency to believe strange things — from alien abductions to dowsing rods — boils down to two of the brain’s most basic, hard-wired survival skills. He explains what they are, and how they get us into trouble. 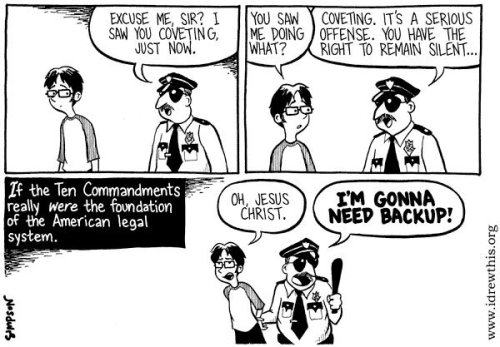 No, seriously! I was dead, just for a few minutes, but dead nonetheless. Long story short, on Sept. 25th an allergic reaction to a supposedly innocuous pill, caused my throat to close, shutting off my breathing and within minutes I was dead, literally.

But this rant is not about my ordeal from that night, which I can’t deny, was scary and surreal, and ultimately ended up with me waking up in the hospital, incredibly tired, with a sore throat and an extremely bruised chest, after 7 minutes of CPR.

This is about how this event has triggered on my friends and family a relentless determination to pervert me… I’m sorry, that should have read, convert me.

As if I hadn’t had enough with what I went through, now I have to endure the endless preaching of my family and close friends. Their arguments would be amusing if they weren’t so recurrent and therefore annoying…

“It is God’s way to let you know that He loves you” Yeah, he was showing some luv, sure. I mean, seriously?

“You must have had a near death experience…? You probably don’t remember but you must have!” Nope! No NDE for me. But we all know that NDEs are natural chemical reactions to Ketamine, and if you didn’t know that, you have some serious reading to do.

“Jesus wants you to accept him into your life.” Accept him? The king of kings? That’s quite conceited, isn’t it? Given that they worship Jesus, shouldn’t they be ‘begging’ him to come into their lives, or rather their delusional minds?

“God is giving you a second chance…” Yeah, a second chance to die! Don’t get me wrong, I didn’t make such a big deal out of this event, but it wasn’t pretty. Those few seconds right before passing out – which are the last that I can remember, were horrible. Try to picture this, being unable to breathe, actually suffocating, watching the terrified faces of the ones around you and being fully aware of it. One shouldn’t have to go through this kind of experience more than once, really!

And my poor mother, who is the only one who doesn’t annoy me so much, and was probably the most affected of us all, keeps praying for me to believe in god as she has done since I was 5 years old. Oh yeah, that’s when I told the priests and nuns in my catholic school that their stories did not make sense to me, that I couldn’t understand, that I needed rational explanations; their responses were something like, those are the holy mysteries and that’s what ‘faith’ is all about – believing in what you cannot see or understand, which made me want to say “you’ve gotta be fucking kidding me!”

If you know me a little, or if you’re following me on Twitter, you’re probably wondering, is this the same Monica that baits theists and tries to make them think rationally? I know, right? Well, when it comes to theists on Twitter I’m fierce and heartless, but when dealing with the people that I’ve known forever, my loved ones, I can’t be blunt and tell them to stop (which has crossed my mind in terms of “why don’t you all leave me the hell alone!”)

I *AM* an atheist in a foxhole, or rather was in that moment. I was dead only for a few minutes, but endured the process of dying for much longer than that, and not even once the idea of god crossed my mind.

When I was done and couldn’t stay awake any longer, while giving in, my last thought was for my mom, for whom my death would have been such a terrible loss.

Putting aside the agitation and the pain, this is pretty cool, right? I mean, how many people do you know that have died and come back to tell their story?

If you’re fairly new to Twitter you can’t remember that time, but let me fill you in; I started this project somewhere in June 2009, it was a hard task, but I got help from my dear kind friend Antoine @OldCola @AthOnTwi who united his own list with mine (thank you, Antoine.) It took like four weeks for me to gather all the names to create this list, the first version was posted on my Tumblr on August 30th, 2009; but at some point there were too many names and Tumblr couldn’t hold them all in one post… who would have thought, right?

UPDATE: Guess what, to hold over 5,000 links to twitter profiles on a single post, triggers a warning from Google Chrome that the website contains content from a place that is known to distribute malware. Unacceptable. So, I hope you guys don’t mind the little changes.

If you’re not on this list and think you belong here, please fill out this form, you just have to type your Twitter user name and your Twitter URL.

ADD YOURSELF –> Here’s The Link To The Form

You can also find the list, and see your own entry at the top-ish right here.